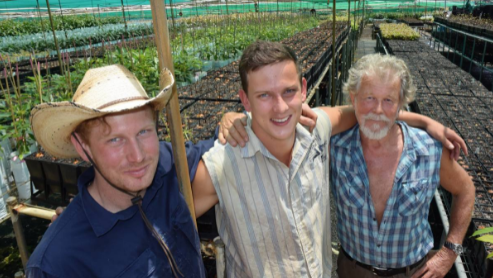 Anderson Horticulture Pty Ltd is Australia’s largest avocado nursery and a family run business of over 100 years. Their core business is supplying wholesales of young trees of the highest quality to orchardists and nurseries in all states.
Graham Anderson Sr is a third-generation farmer at Duranbah, north-eastern NSW.   A pioneer in the Australian avocado industry, Graham’s father planted avocados at Duranbah, NSW in 1950.  Graham followed in his fathers footsteps in 1958 at the age of 15. Growing and selling avocados was just not enough for Graham so at the ripe old age of 17 he started an avocado nursery.  In 1970, he built his third nursery under the guidance of Patricia Barkley from the Department of Agriculture NSW and Professor Ken Baker from the University of California, Berkeley. Professor Baker was brought to NSW by the Department of Agriculture to introduce the University of California system of nursery culture using steam pasteurisation and strict hygiene control.